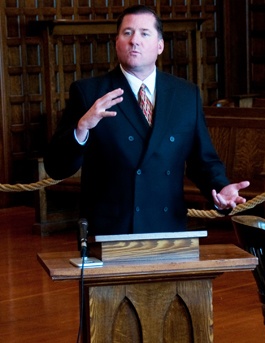 Winston H. Connor II, completed his undergraduate degree at Northeastern State University in Tahlequah in 1986 and in December 1989 graduated from the University Of Arkansas School of Law in Fayetteville, Arkansas. After passing the bar exam in the State of Oklahoma he started his career. He became an Assistant District Attorney for the 13th Judicial District comprising of both Ottawa and Delaware Counties where he served as lead trial attorney until May of 1996. Since May 1996, Winston has been in private practice with Stockwell & Connor, PLLC.

Winston has been honored to serve as a member of the Board of Directors of the Oklahoma Criminal Defense Lawyers Association from 2013-2017. Recognition of his dedication to criminal defense advocacy has been acknowledged by many, including the Oklahoma Criminal Division of the Oklahoma Bar Association which awarded him the coveted Clarence Darrow Award. The Clarence Darrow Award is only given to one lawyer in the entire State of Oklahoma per year as is recognition for outstanding trial court skill and accomplishment.

Winston is admitted to practice law in the State of Oklahoma handling cases in both State and Federal Courts, as well as cases across the country. He is a member of the National Association Of Criminal Defense Lawyers, the American Bar Association, the Oklahoma Bar Association and both the Criminal and Family Law Sections of the OBA. He is admitted to practice in the Northern and Western District Oklahoma Federal Courts. He primarily practices in all of the courts in Northeastern Oklahoma with his office in Delaware County.

Winston’s successful trial record is unquestionably impressive. His competent and ethical representation of his clients, while always placing their best interest first, is what truly sets him apart.